ITF-2 places building a network of people interested in space by evoking their interests in space wireless communication in the amateur radio frequency band as its major mission, has characteristics such as using not only CW beacons (A1A) often used in conventional university satellites and 1200bps AFSK (F2D) but also radio transmission by Morse (F1A) by frequency modulation, and is featured a lot in newspapers and magazines as well.

We make a margin on the transmission output so that the signal can be received with a simple antenna and wireless equipment, and in order to ensure sufficient power capacity, 18650B lithium-ion batteriesare used.

Figure 1 shows the voltage change during operation for 2 months.

In the nighttime without power generation from the solar panel, it becomes above 4V, and in the daytime it is fully chargedand as designed the overcharge protection circuit operates, and the solar battery generation voltage of above 5V is measured (In this state, the lithium-ion batteriesare electrically disconnected from the solar panel).

Also, after late February, the voltage data at the transition from the shade to the sunshine is measured, and the voltage estimated to be almost fully charged was measured.
From these data, it was confirmed that charge and discharge were performed smoothly and that the deterioration was not seen either.

The temperature of the batteries is kept at 8°C by the heating device. 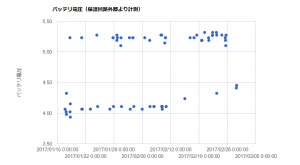