The lithium-ion batteries roughly classified into those using a ternary system and a manganese system as a positive electrode, and one using graphite as a negative electrode material is common, and UBE Industries in Japan has the largest share of an electrolyte solution in the batteries.

This electrolyte solution uses an organic solvent and it does not freeze even at low temperature and it operates (up to about -10 ° C), and the battery voltage increases because the potential difference between the positive electrode and the negative electrode is large.

Due to the relationship between voltage and capacity, the energy density in weight units is high,therefore batteries become compact, lightweight and superior in terms of space and weight in applications where many batteries are used such as cars. 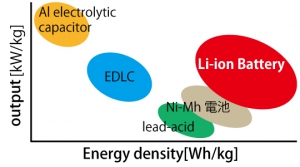 The lithium-ion battery was initially considered unsuitable for high current discharge, but is being improved by wide and thin separators from Asahi Kasei and so on.

Future challenges are high capacitance, safety assurance, and cost reduction.In terms of high capacitance, general lithium-ion batteries with currently 3.7 V are being raised to about 5 V output, and the development of new separators and an electrolyte solution has been progressing prior to mass production.

In terms of safety,it tends to be realized by improving polymer materials used to prevent short circuits in separators.

In addition, in terms of cost reduction, research and development have been progressing to use inexpensive manganese systems in battery development electric vehicles using ternary materials, materials such as nickel, aluminum and so on by reducing the use of expensive rare metals.