The cell maker is inspecting the cell.
In a fully charged state of the cell, for example, it is left for one month and the voltage is measured, and a cell with a large voltage drop is considered as bad, but it seems to change the condition to shorten the period.
Since the assessment conditions are different for each cell maker, there is a difference in the characteristic of self-discharge amount.

Basically, whichever lithium-ion battery maker’s cell, self-discharge is different.
Empirically, the cells with large self-discharge to be the issue will be several ppm (parts per million).
For laptop computers, packs of 3 to 9 ppm are calculated to be problematic and are practical quality level.

In addition, if the battery pack becomes a large-scale,it will cause decrease in pack capacity due to self-discharge trouble, but in order to avoid this it is necessary to control the balance of the lithium-ion battery pack.
Cell balance correction is a correction that modifies the difference of cell voltage in a pack through self-discharge.

For example, by bypassing a cell with a low discharge end voltage and bypassing it to circuit method charge end without discharging, it is modified by a method charges only from the high voltage cell to the low cell. 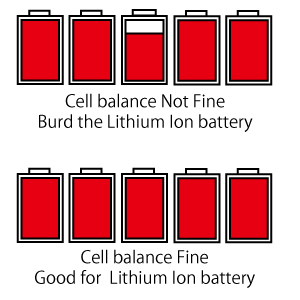 In the battery pack, the potential difference of the cell is confirmed by limiting the cell used for the pack within the same lot and by measuring the voltage of the cell.
Also, in a pack with a large number of cells, a cell balance circuit is basically incorporated.