Discharge characteristics of lithium-ion batteries change greatly depending on current, temperature, and charge and discharge. 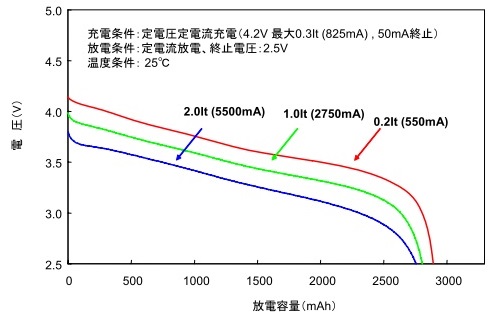 As per a graph commonly displayed, it is common to display a graph of each discharge rate at a discharge temperature of 20 °C.

The capacity of a battery depends on its size, and the battery characteristics do not depend on the absolute value of the current but on the relative value to the capacity value. 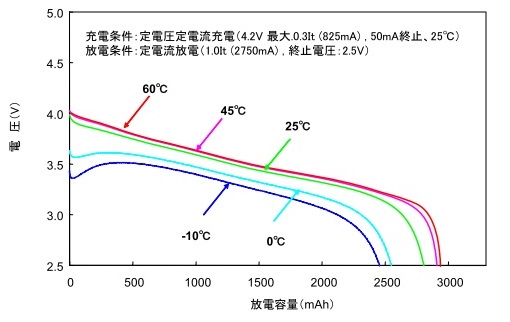 Therefore, the relative display using the discharge rate is used to indicate the battery characteristics.

Lithium-ion batteries tend to have large voltage drops during the high current discharge at low temperature, and normally the discharge end voltage is usually set at 2.5V in a single cell, but there is no leeway up to 2.3V when the lithium-ion battery pack prohibits and stops discharge from 2.5V, and it will stop the discharge in a very short time if being used.

Therefore, use of the lithium-ion battery is assessed that the remaining battery level is 0 when it is at the set side and the voltage of the battery pack is about 3V (on mobile phones, 3.2V is often seen as the discharge end voltage), and therefore the battery capacity that can be used will decrease greatly when the overall cell voltage at the low temperature side decreases.

To select a cell, if the margin is increased due to the necessity of determining the minimum voltage to be used, the required maximum current, and the battery capacity, the battery will become larger and the cost will also increase.

The characteristics of the lithium-ion cell are not disclosed in much detail publicly, but it is necessary to acquire special environmental temperature and discharge current data.

Particularly, with respect to current, normally it is not common to discharge with constant current when in use.
It is also possible to estimate the usable time of the battery by simulating the current pattern.

The discharge pattern at -10°C shows a behavior in which the voltage sharply drops immediately after the start of discharge and then picks up for a while, but the lower the temperature and the larger the current the more remarkable it is, and the reason why a drop in voltage stops is self-heating due to resistance loss inside the cell.

This is because the voltage value rises as the temperature of the lithium-ion battery rises.
Therefore, the characteristics when continuous discharge is performed are shown.